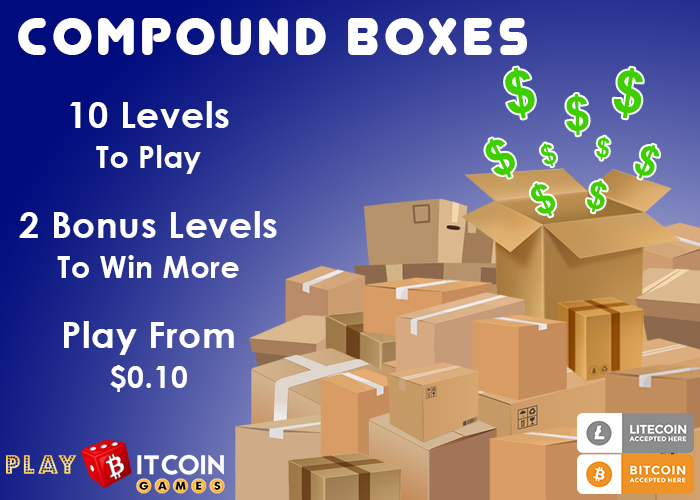 How to play Compound Boxes Game

The Compound Boxes game is one of the most popular pastimes you will find here at Play Bitcoin Games.

The fact that it has only very few rules and is so simple to play makes it the favorite game of new casino players out of all the entertaining and original games we provide.

This game has ten stages and two bonus lines, each containing four boxes that are grayed out for the player before starting to play.

The first line unlocks after selecting the wager size, which can range from 0.002m฿ to 2.00m฿ each play, and the player must choose which box to open.

After that, the player must decide whether to stay playing or take their rewards with them. If he chooses to keep playing, the next line will unlock, ready for his choice.

According to the Compound Boxes’ 1 in 3, 1-3, or 1/3 odds computation, the player’s option should win ideally 3 times and lose once out of every 4 possible outcomes.

With respect to the implied probability of 1/3, this means that for each round you play, your pick has statistically a 75% chance of winning and a 25% chance of losing.

Usually, a payoff of 33% comes with odds of 1/3. Rewards in the Compound Boxes game range from 1.1x to 1.5x. Compounding increases the payment from a little reward to a big one, and the two bonus games add even more interest and excitement to the game.

Compound Boxes is a true chance-based game since the odds of winning or losing when opening a box are reset at the start of each round thanks to the Random Number Generator, a method that makes sure the outcomes of every round are truly generated at random and also assures that there are no “due” outcomes.

Despite being fairly simple to play, there are a few things the player can do to optimize the Compound Boxes session:

Compound Boxes is a brand-new game that was made entirely from scratch and is only accessible on Play Bitcoin Games, Play Perfect Money Games, My Traffic Value, Paidverts, and PTCshare.

However, it is similar to two well-known and quite old betting games in terms of their fundamental mechanics, opening the box and winning or losing: the three-card monte and the shell game (also known as cups and balls games), with the peculiarity that in Compound Boxes, three of the boxes are winners and the remaining one is a loser.

The Random Number Generator algorithm safeguards the player from trickery, and the MD5 hash offers a mechanism to confirm there was no tampering with the results, in contrast to what occurred during human dealing played in those two traditional games.

As a result, Compound Boxes Game is a provably fair, secure, and engaging form of entertainment.

Try Compound Boxes if you want to play a short casino game with straightforward rules. To access the game immediately, simply click the button below. Good luck with playing the game!

What is crypto gambling and why play in crypto casinos?